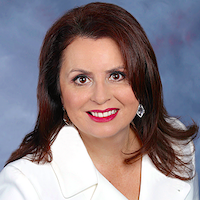 Theresa Robeldo attended Ventura College for two years and then enrolled in Sawyer College where she became certified in Legal Studies. She worked as a freelance paralegal for dozens of law firms in Ventura County. In 2005, Ms. Robeldo earned her real estate salesperson license. She then earned a GRI Designation in 2008 and a real estate broker’s license in 2010. In 2016, she received a luxury real estate designation. Theresa has owned her own business, Diamond Realty, for eight years.

As a businesswoman, Ms. Robledo has been active in Chambers of Commerce in numerous cities throughout the county, the Soroptimists International of Fillmore. She assists the Boys & Girls Club of Santa Clara Valley and is involved with Safe Passage Heals, a non-profit in LA helping victims of DV. Theresa is an avid arts supporter and frequently displays work for sale by local artists in her office space, hosts receptions for artists and hosted a poetry reading with the VCAC featuring students who applied for the inaugural position of Youth Poet Laureate.