Luzmaria “Luzma” Espinosa is a poet, a life-long activist, teatrista, danzante and cultural worker. Born in Michoacán, Mexico, she and her family migrated to Ventura County in 1956, and she attended Santa Paula schools. She received BA degrees from UC Santa Barbara in Spanish and Sociology, and she earned an Adult Teaching Credential and MA from Antioch University. She has shared her poetry in K-12 schools, community colleges and community cultural events in Ventura County, Santa Barbara County and San Luis Obispo County, throughout California, Mexico, Nicaragua and Africa. She acknowledges that her inspiration to develop her poetry came from her mentors and friends, fellow activist artists José Montoya, Javier Pacheco and John Trudell.

Ms. Espinosa has performed in theater productions with the former group, Los Mascarones of Mexico City, Teatro Gusto of the Mission Cultural Center in San Francisco, Teatro de la Calle in Sacramento, and Teatro In Lak ‘Ech of Oxnard. She was also a member of TENAZ (Teatro Nacional de Aztlan).

In 1979, she became a member of the Royal Chicano Air Force, a Sacramento, California-based art collective which supported the activities of Cesar Chavez and Dolores Huerta and helped to advance the cause of the United Farm Workers movement and other marginalized groups. She also began her life’s passion of sharing and teaching Danza Azteca. She is the first person to introduce Danza Mexica/Azteca to the Central Coast of California, where her group has impacted hundreds of lives—particularly youth—throughout Ventura County.

Her archives were recently installed at California State University, Channel Islands (CSUCI) in Ventura County and are a testament to her lifelong commitment to peace and justice. This exhibition features her rare, never-before-seen art collection, which includes original pieces by members of the Royal Chicano Air Force, such as José Montoya and Estebán Villa, and other Chicana/o artists of the 1970s, such as Magú and more. Her unique collection features well-preserved original documentation of the Chicano Teatro movement and her own works of poetry and Danza history. It provides a visual, historical narrative of a rich Chicana/o Cultural Art Movement that includes rare recordings, artifacts, primary sources and decades-long solidarity work with Centro America and beyond. Her collection inserts a Chicana narrative and local context, including from her hometown of Santa Paula. 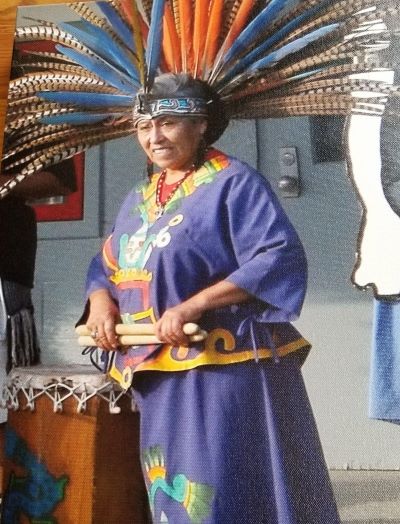