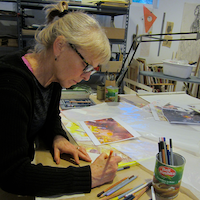 Ms. Osher was trained as an arts educator. She has taught in public and private schools and served for eight years as Associate Curator of Education at Carnegie Museum of Art in Pittsburgh. After raising a family, she left the museum to pursue a full-time career as an artist. Her first solo exhibition in 2004, Boy Code, examined cultural expectations of masculinity by translating doodles of adolescent boys into embroidery. Her idea-based practice incorporates video, installation, fiber, performance, drawing, and sculpture in works that often question environmental, social, and political issues.

She has exhibited in Pittsburgh, New York, Los Angeles, and internationally, garnering prestigious selections for a 2004 Media Arts Fellowship from the Pennsylvania Council on the Arts, 2005 Pittsburgh Biennial, 2008 commission by American Jewish Museum, 2008 Tough Arts Residency at Children’s Museum of Pittsburgh, 2009 Virginia Center for the Creative Arts residency, and 2010 Schloss Pluschow residency in Germany. In 2013 she was chosen for Sites of Passage, a project with Palestinian, Israeli, and American artists. Her work was selected for Governor’s Island Art Fair, NYC, in 2014 and a Museum of Contemporary Art Santa Barbara regional exhibition in 2015. Ms. Osher remains deeply committed to arts education and has been honored with several teaching residencies that have included working with populations as diverse as rural primary school children and urban adults with mental illness.