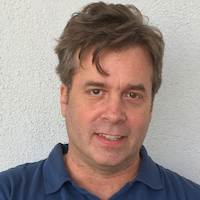 Craig Rosen received a B.A. in English from George Washington University and an M.F.A. from Columbia University film school. Originally from Washington D.C., Rosen was lead singer in Static Disruptors, a band he formed at college. In 1982 he produced a single of a rap song he wrote and performed called, “D.C. Groove.” He has taught poetry writing in numerous settings, including to boys and girls at the Juvenile Facility, students in the Recovery Classroom at Gateway Community School, adults at Todd Road jail, Oak View High School students and members of the Tequio Youth, part of the Mixteco Indigenous Community Organizing Project. He has edited four chap books of poems by his students, published with support from the Ventura County Office of Education.

Rosen manages JumpStArts for VCAC, a recipient of consecutive grant awards from the California Arts Council. JumpStArts brings arts to juvenile offenders. Rosen has produced documentaries, short films and one feature-length movie and written several original screenplays. He just finished his first novel, Broken Heartland, for the Young Adult audience. Craig’s passion is working with underserved communities and the arts, helping people to find their voice and work toward personal transformation.