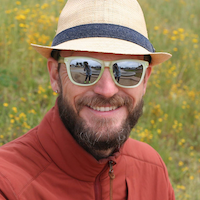 Pete Ippel, the son of a dancer and a musician, was born in Oak Park, Illinois and has been surrounded by the arts since birth. He moved to Morris, Illinois in 1989 and started to participate in athletics rather than dance. After high school, Pete attended Cornell University where he received a BA in psychology and a BFA in photo / digital art making. He continued to follow his sporting dreams in the high jump, which culminated in a school record leap of 7 feet 1/2 inch in 2001. In May 2004 he attained an MFA degree in the New Genres department of the San Francisco Art Institute and in 2017 completed his Career Technical Education credential in Art Media and Entertainment as well as Information and Computer Technology.

Presently Pete resides in Working Artists Ventura, a sustainable artist community in southern California. As a conceptual artist, his focus is on performance, video and installation. His work is in numerous private collections and has been exhibited in New York, California, and internationally. As curator, Mr. Ippel mounts eight exhibitions annually with the Ventura County Arts Council Atrium Gallery forcing county-wide dialog about the role of art in public space. As a grant-reader and juror, Pete has collaborated with Rotary International and their Perspectives on Peace initiative. As educator, Mr. Ippel teaches in Spanish and English, has classroom experience in robotics, graphic production, art, and design. He focuses on preparing career-ready artists with emphasis on entrepreneurship, problem-solving, and critical thinking. He also coaches the high jump where multiple athletes have become state qualifiers under his tutelage.

In addition to his lectures and presentations, Mr. Ippel’s professional activities include organizing the Working Artists Ventura Artist Council, advising the ARTLIFE foundation, and helping Ventura Unified School District Arts Collaborative. Through these efforts more artists have a voice in the community, the art historical significance of Ventura’s creatives is being preserved, and in cooperation with the Ventura Education Partners and the Museum of Ventura County, the annual student art exhibition is a resounding success. Thus, insuring young artists will be recognized for the foreseeable future.

Pete Ippel’s honors include being the recipient of the Ventura Education Partners Grant, Center for Cultural Innovation NextGen Art Grant, the City of Ventura Mayor’s Arts Award and the Edith and Walter King Stone Memorial Prize for Promise in Art.